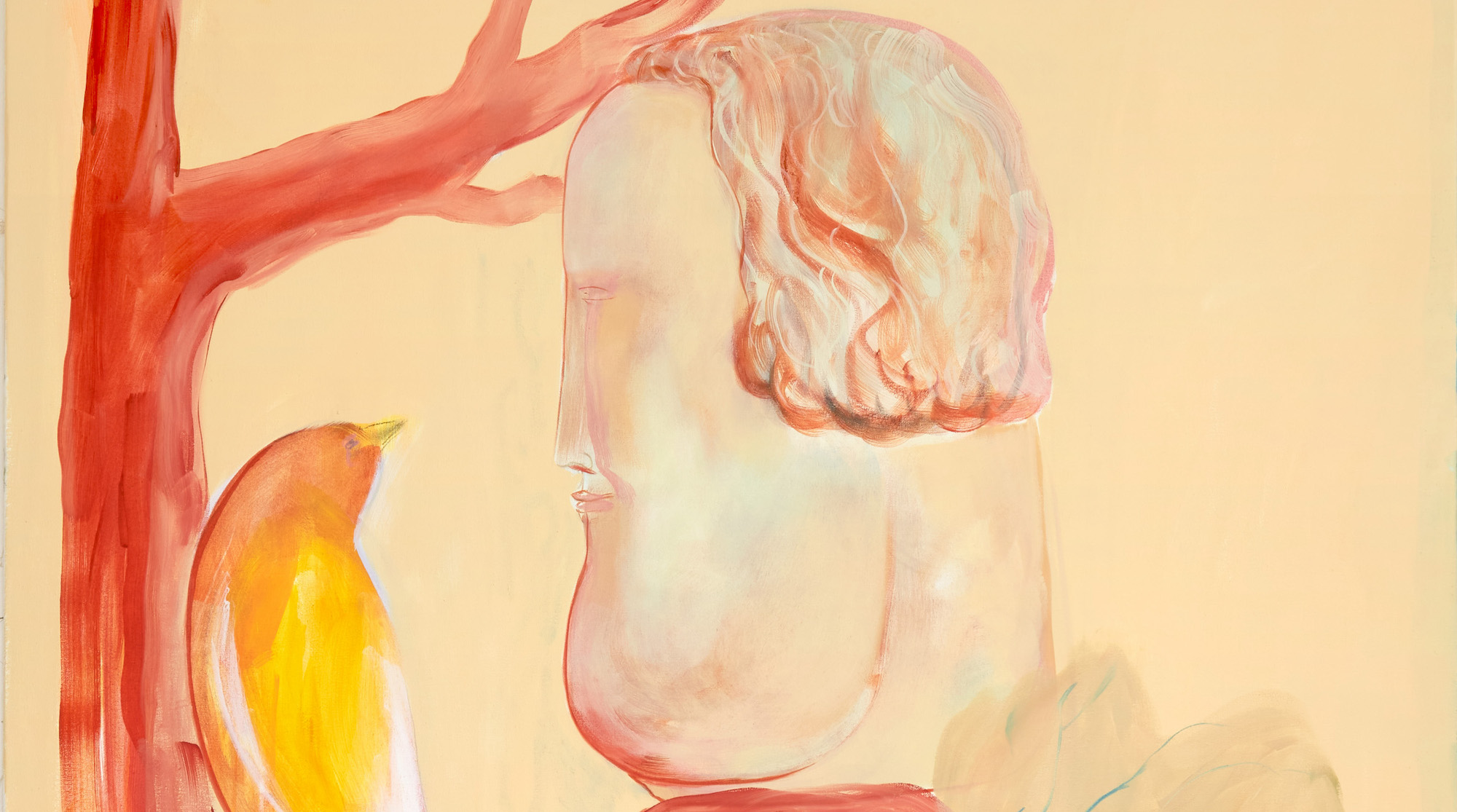 We are delighted to announce the first solo exhibition of Ralph Bürgin (*1980 Basel, lives and works in Basel, Switzerland) with the gallery. The exhibition titled The Great Escape will showcase his most recent paintings which represent a further development of the motives the artist has developed over the last years. This presentation follows Bürgin’s participation in our group exhibition Embodiments in spring 2022, and the survey exhibition of contemporary painting in Switzerland (Un-)Certain Ground at Kunsthaus Pasquart, Bienne.


On Ralph Bürgin
By Chus Martínez

The best way to create a future is to re-invent our pasts. The question of the future is the question of a new world. But can a new world really emerge from the old one? Or better said, the future is a fantasy notion we humans created to name a certain unhappiness with what we are, with the current moment. We created the future to give us all a chance to morph, to act differently and so, to be different from what we are. Humans, we are a little bit of a dishonest species. Oh! That was harsh, perhaps it is better to say we are panicky, fearful beings. That is why we wish for transformation, but we love and care for continuation in the meantime. That is why we need art. Art is the substance and the space for the future in our present. It transforms and reverses what we are in exactly the speed we can assume changes. It acts in our senses without prescribing new behaviors. It infiltrates us without us becoming aware or suspicious.

The work of Ralph Bürgin desires a change. Can painting as a medium still surprise us with new orders? His answer is yes, it can. But in order to do so, one needs to precisely inquire into what would we love to alter and when did painting have a chance to act upon this subject matter. If we wish, for example, for an elastic, fluid, open, differently social role of masculinity painting would not only be the perpetrator but also could, homeopathically, provide some paths towards the masculine. Style, for example, has been the tool art has used to create certain images and to perpetuate certain topics: force, energy, power, dynamism. Returning though to certain styles one could alter those images, reconsider these traits and help our brains to remember the images we have absorbed historically under a different light. Yes. Painting can assist in „correcting“ the interpretations assigned to images of the past through new images. His work is interested in triggering new associations with the painting in the present and with the painting we remember from the past. Resemblance is the way style works. It creates an air, an illusion of sameness that helps us to connect the images. Ralph Bürgin adds his images by resembling certain styles to the past. Once there, he will be able to send a different message or just to reconsider the transmission chain of symbols and values that are entangled with the masculine. Indeed, it is almost an act of science fictional action. But painting is a fiction and fictions have an enormous impact in the real, as we know from many sources. Being a painter, Ralph Bürgin’s work says, means to become a painter. There is nothing wrong in being a male painter and yet only if one assumes that the role demands a high sense of responsibility, one that implies acting in the history of the medium.

In this respect, a very important aspect of his work, is his use of compositional elements. The house –as the element that we associate with space but also with protection–, the outside, as an eternal reference to landscape and the human figure personified in the head. Composition, indeed, addresses the question of how do we see the world? Order or the collapse of this order by bringing elements together makes us reflect on the importance of the mind in the perception of the real. We never felt the walls of our houses and the roles we do play in our life so poignantly as during the pandemic times. Our senses became alert to every element that composed our space, physical and virtual, our landscapes became repetitive and odd… Composition is primordial because through the different elements that Ralph Bürgin selects to form and shape his paintings he is also reflecting on how the real and the fictional come together. In his work, we seem to almost forget that painting is a bi-dimensional media, and we very strongly perceive the forms as having volumes and those volumes needing almost more space than what a canvas can grant them. It is as if the logic of sculpture has penetrated the practice of painting to make us all aware of the importance to widen our horizons, to actively produce mechanisms of using painting to face out toward an endless horizon, towards a bigger and different world. His way of using composition is a way of producing a hybrid: a skillful combination of both innovative and traditional artistic means. We do recognize in his paintings traces and traits of artistic languages we know, and yet his ways are new. Ralph Bürgin’s work stresses composition as a simple way to pay attention to the conventions we have learnt, altering those conventions only a little bit, we are able to engage into the perception of forms and their relation to each other. His work announces change and transformation as something simpler than we thought, as something closer, as a process that can be started just by paying attention to how things can be combined differently.

The new works present at this exhibition have a continuity with this self-imposed mission Ralph Bürgin has been performing through his painting for the last few years. Painting is a language that allows both material interaction with the symbolic and the social at so many levels. Expressing oneself is a matter of finding out how one has been defined through centuries, how cultural and social definition of us coincide or differ from who we think we are. The man one is may be a man one needs to become, one that can serve other genders to get realized. Perhaps being a man could be read as being the provider of a safe space using the privileges to enable those who have none. Can painting help us to do this? Well, there is no such a thing as a solution, but painting is an excessive and training the mind and the senses differently may open up space for different futures. He thinks so. 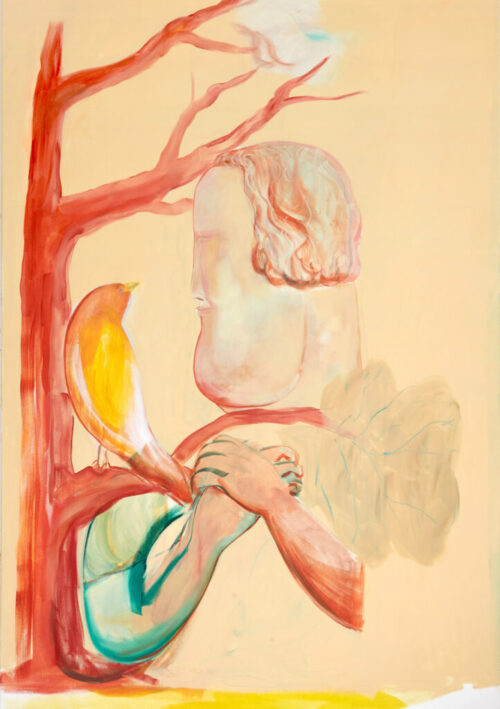 Ralph Bürgin (*1980 Basel, lives in Basel, Switzerland) studied at the Academy of Art and Design in Zurich and Basel, where he graduated in 2018 with a Master in Fine Arts. The painter and sculptor lives in Basel and works in his studio in France (Alsace). Recent solo exhibitions include Watching a Peaceful River at Galerie Barbara Seiler, Zurich, Switzerland, 2020, La place at Centre culturel suisse, Paris, France, 2019; and Pieces and Shadows at Kunstverein Diessenhofen, Switzerland, 2017. Ralph Bürgin’s work has been included in numerous group exhibitions, including 2022 at Kunsthaus Pasquart,  Biel, at Space 25, Basel, and Livie Gallery, Zurich; 2021 at Wilde Gallery, Geneva, Switzerland; 2018 at Kunsthaus Baselland, Muttenz, Switzerland; 2016 at Ping/Pong, Basel/Miami, Los Angeles, USA; 2014 in “Kunstkredit Basel-Stadt, Werkbeiträge 2013” at Kunsthalle Basel, Switzerland. In 2019, a publication was dedicated to the artist as part of the Cahier d’Artistes series published by the Swiss Arts Council Pro Helvetia, with a text by Felicity Lunn. The artist has also realized several projects in public spaces, including Gasträume 2020 in Zurich, curated by Christoph Doswald, and a sculpture project initiated by Kunstkredit Basel-Stadt in collaboration with the Department of Construction and Transport, which was presented at the Heuwaage in Basel in 2022.