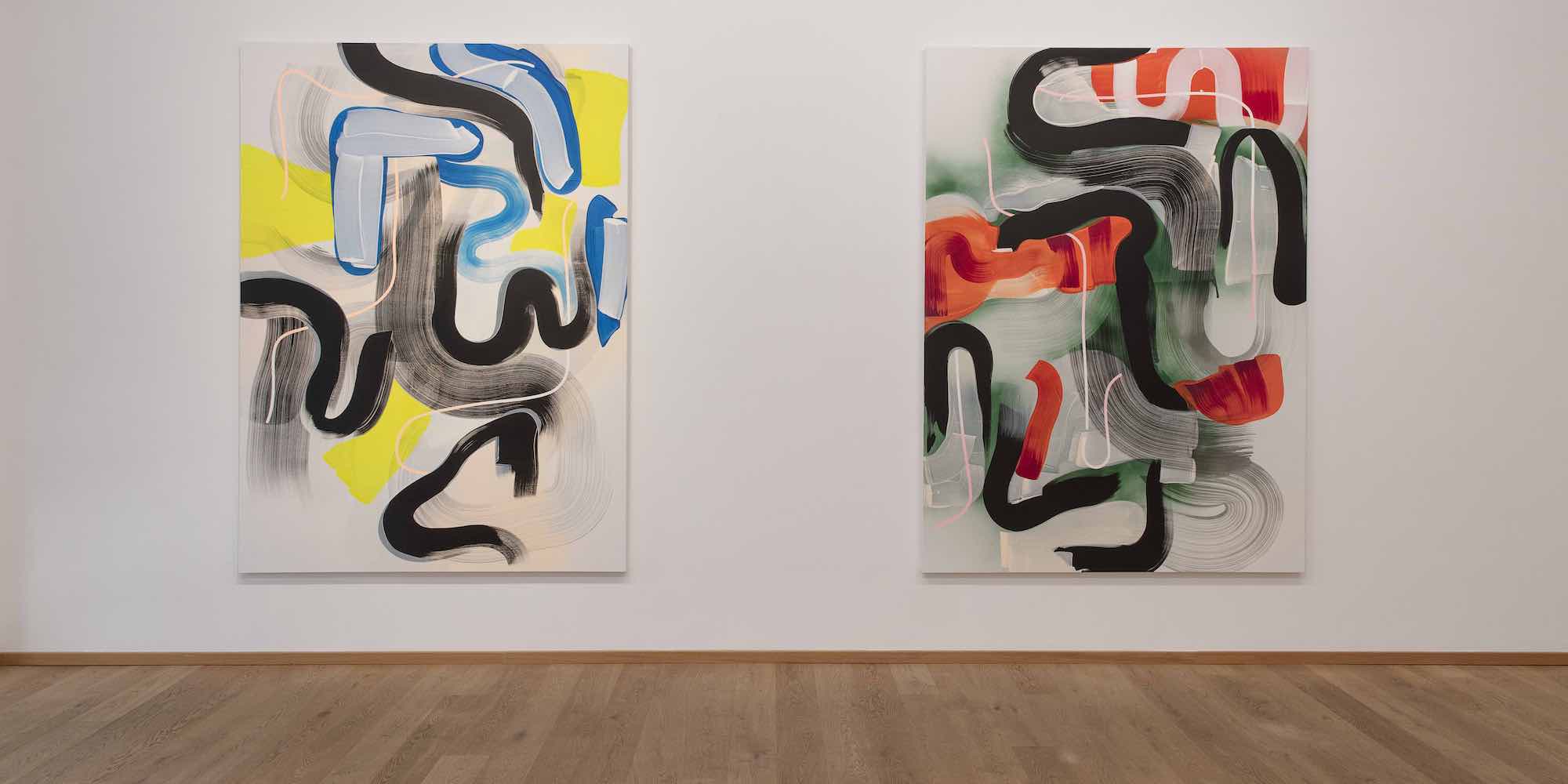 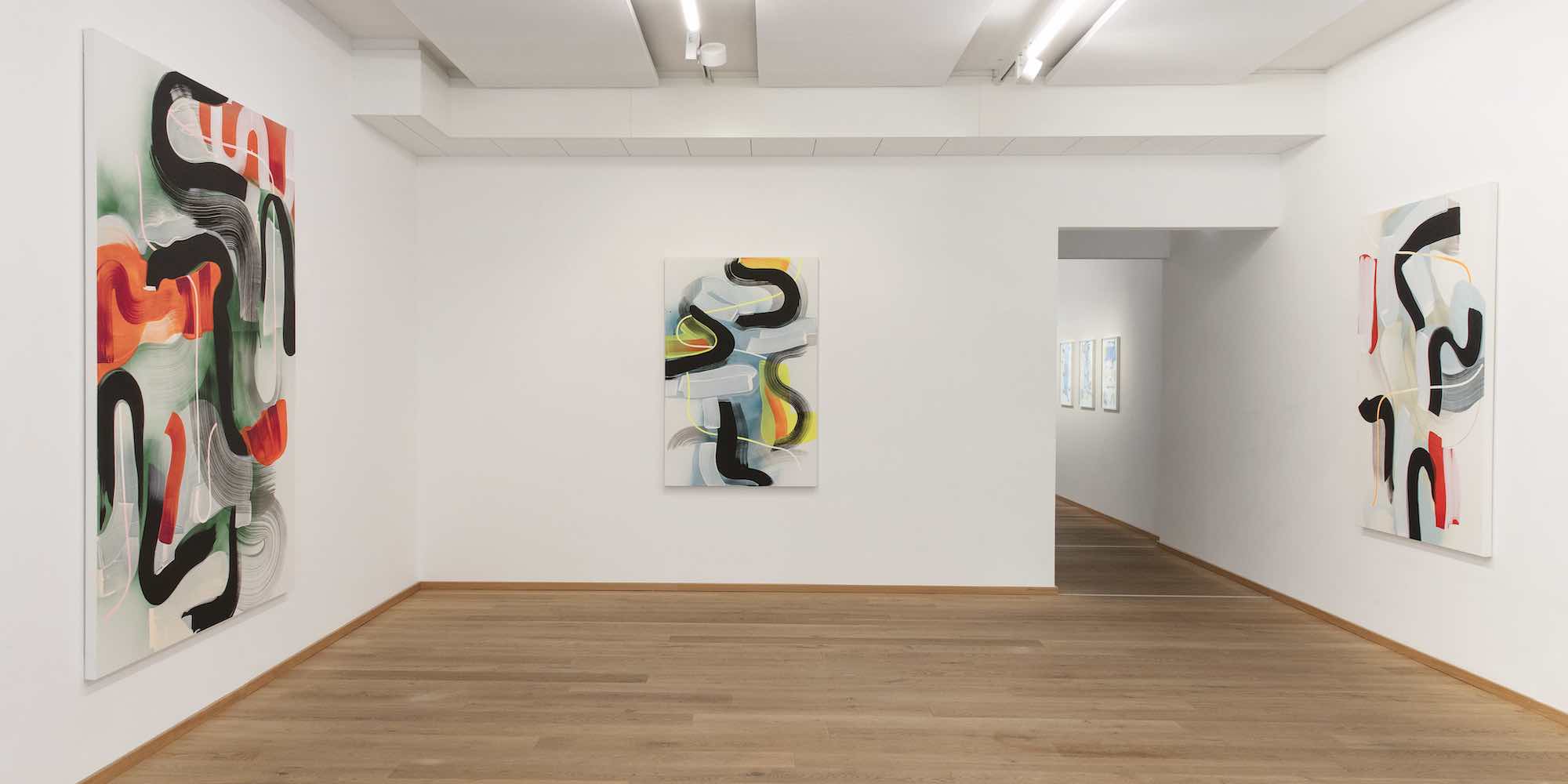 “New Shapes”, as in new forms, gestalt, constructions and figures. They are certainly new as they were recently painted by Marius Lüscher, but he associates more than that with them. In his work he is concerned with the development of novel forms, as spontaneously as thoughtfully. Indeed, Lüscher’s painting is organized in such a way that it is characterized less by surprise than by the reflected development of a thoroughly painterly expression. While until a few years ago, Lüscher placed a larger number of elements next to and on top of each other, over time he reduced these, clarified what was happening, and arrived at strong, concentrated pictorial statements.

But what do these pictorial statements mean, and even more, what do these “New Shapes” mean? By choosing an English-language term, Lüscher consciously refers to his preference for new American painting, to its unconcerned reliance on the factual and the visual persuasiveness of a picture. The “shapes” can be described by stripping away all the qualities that can be associated with forms: They do not follow any geometric rule, neither are they coherent surfaces that appear as pictorial backgrounds or as backdrops that frame any  action; they don’t represent a gestalt in which the sum of their parts corresponds to a predetermined order; they are neither entities that can be related to the organic or inorganic world, nor can figures be discerned in them that ultimately exhibit anthropomorphic features.

In contrast to all these repeatedly used typologies of pictorial representation, Lüscher seeks to invent something that can be defined solely in terms of painting, and as such in several respects: what we see in his new paintings are traces left by the brush on the painting surface. At first this seems simple and self-evident, but if we look at the result, it becomes apparent that this cannot be grasped in a few words. The brushstrokes are of different widths, densities, and lengths, and within the painting they always stand in relation to each other. The scope is wide—it ranges from the area-forming layered band to the sharp graphic line penetrating the picture. No brushstroke stands alone; where it breaks off, the surface opens up, but then movement is resumed and continued—not as a repetition, but rather as a transformation, a transfer to other levels and a changing expression. Nothing is strenuously asserted, everything must come together in a fluid and visually coherent manner.

There is no simple sequence in the picture that can be read from back to front; the depth is solely a matter of perception, when one element protrudes forward in a certain area, it is immediately displaced by others back into the surface or the imaginary depth of the painting. The “shapes” intertwine and mutually condition each other; even when they are clearly formulated, they never appear complete, they lead the eye to the neighboring element that fills in the void. By referring to each other and grouping and forming themselves within a picture, the elements avoid the completed form and allude to something that is never presented as a whole. Only something already known can be alluded to, but since Lüscher carefully avoids references to things outside the picture, such reminiscences are futile. The movements of the brush allude to experiences one has already had with pictures; they are hidden memories of painting. As mentioned in the beginning: Lüscher paints and demonstrates painting at the same time; by inventing something and introducing it as new to the picture, he simultaneously speaks of what painting has produced as a history. The novel does not consist of itself, it is the working through of what has already been seen. 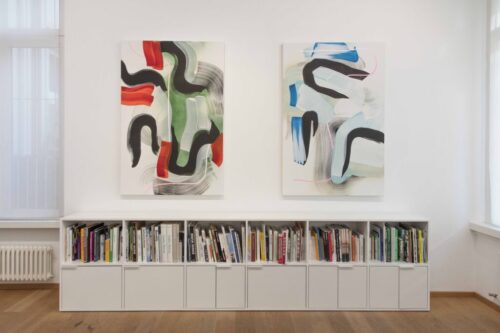 One aid to this endeavor are the various printing processes that Lüscher uses not as a graphic artist but as a painter. When he prints a color gradient in offset and uses it as the basis for a monotype, he is not concerned with duplication; he is aiming for a transparent and fading color effect that cannot be achieved any other way. It creates an unreal space on which the lines of the monotype can unfold. They achieve this easily because they oppose the monochrome ground in every respect—linear instead of two-dimensional, unpredictably decisive instead of metered, suggestively questioning instead of affirmative—one could go on and on. In this sense, the monotypes are strict models of imagination for the painted pictures, for they demonstrate their inner construction with simple vocabulary and disarming openness.

These deliberately demure works on paper lead to contemplations on color. The evaporating ground is so obviously trivial that it becomes acceptable again for this very reason. The pastel colors do not deny their origin in the photographs Lüscher took in Los Angeles a few years ago and published under the pseudonym Freddy Perez; they stem from billboards, painted walls and lettering that collide unplanned and unchecked on the streets of this city, illuminated by the Californian sun. The refreshing lawlessness of these contrasts is the color theory Lüscher can draw on as a painter. The “shapes” enter into a cool and painterly unconsumed light, whose artificiality underscores their novelty. 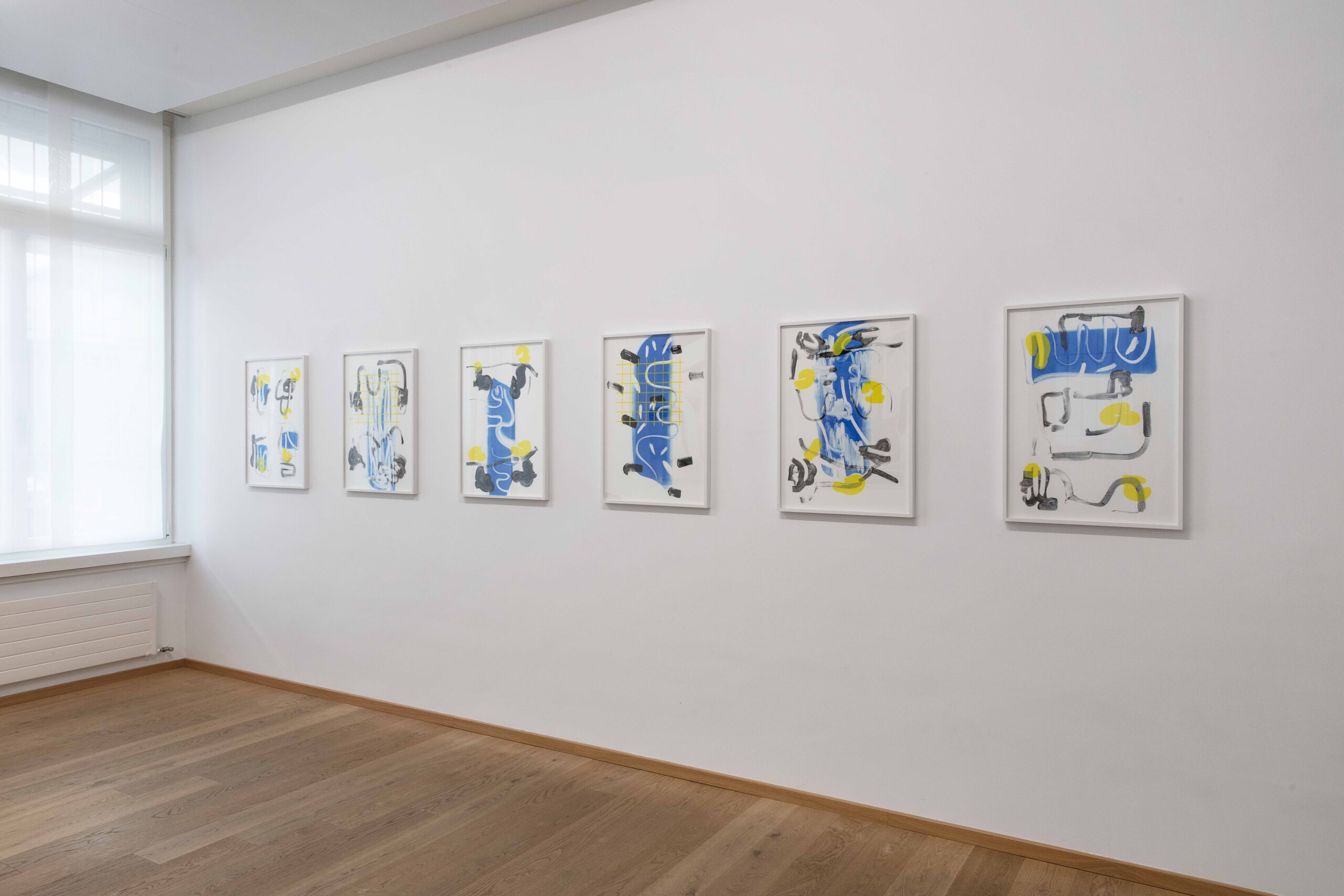 Marius Lüscher (*1974 Zurich, lives and works in Bern, Switzerland) works in the media of photography, painting and printmaking. An extended stay in Los Angeles from 2014 and 2017 and a residency in Brooklyn, New York in the summer/fall of 2022, made possible by the Pollock-Krasner Grant, have left a lasting mark on Lüscher’s work. In the summer of 2022, the Musée LaM in Lille, France, dedicated a solo presentation to Marius Lüscher’s work, titled «Under the Sun». Other recent solo shows included in 2021 at Haus der Kunst St. Josef, Solothurn, and at AFF Space in Bern. Marius Lüscher’s works were part of numerous group exhibitions at Kunsthalle Bern, Centre Pasquart Biel, Kunsthaus Langenthal as well as the Kunsthaus Aarau.