After having been awarded the Werkbeitrag Kunstkredit Basel Stadt in 2021, Sofía Durrieu’s new performative sculpture/situation Mise-en-abyme I is on view at Kunsthalle Basel as part of the exhibition Cat’s Cradle, curated by Len Schaller, from September 25 until October 9, 2022.

Sofía Durrieu’s Mise-en-abyme I turns on hysteria in nineteenth-century France. Taking the Hystérique as her subject, Durrieu analyses how Otherness is classified in order to rationalize and isolate it. Her study is not confined to hysteria, however, and should be understood against the backdrop of contemporary constructs of Otherness. Starting with a portrait, which she reproduces and then fragments, she alerts us to the mechanisms underlying such images as gauges for the classification of typologies of Otherness. Eschewing any simplistic allocations, Durrieu emphasizes the ambiguous position of the Hystérique as an intentional subject and collaborator, but also an object of manipulation. Instead of “consuming” the body of the Other from a safe distance, and hence flattened and reduced, viewers are invited to insert their own body into that of the Other, to take up its contortions and with them the place of a body that has been exhibited and consequently condemned. 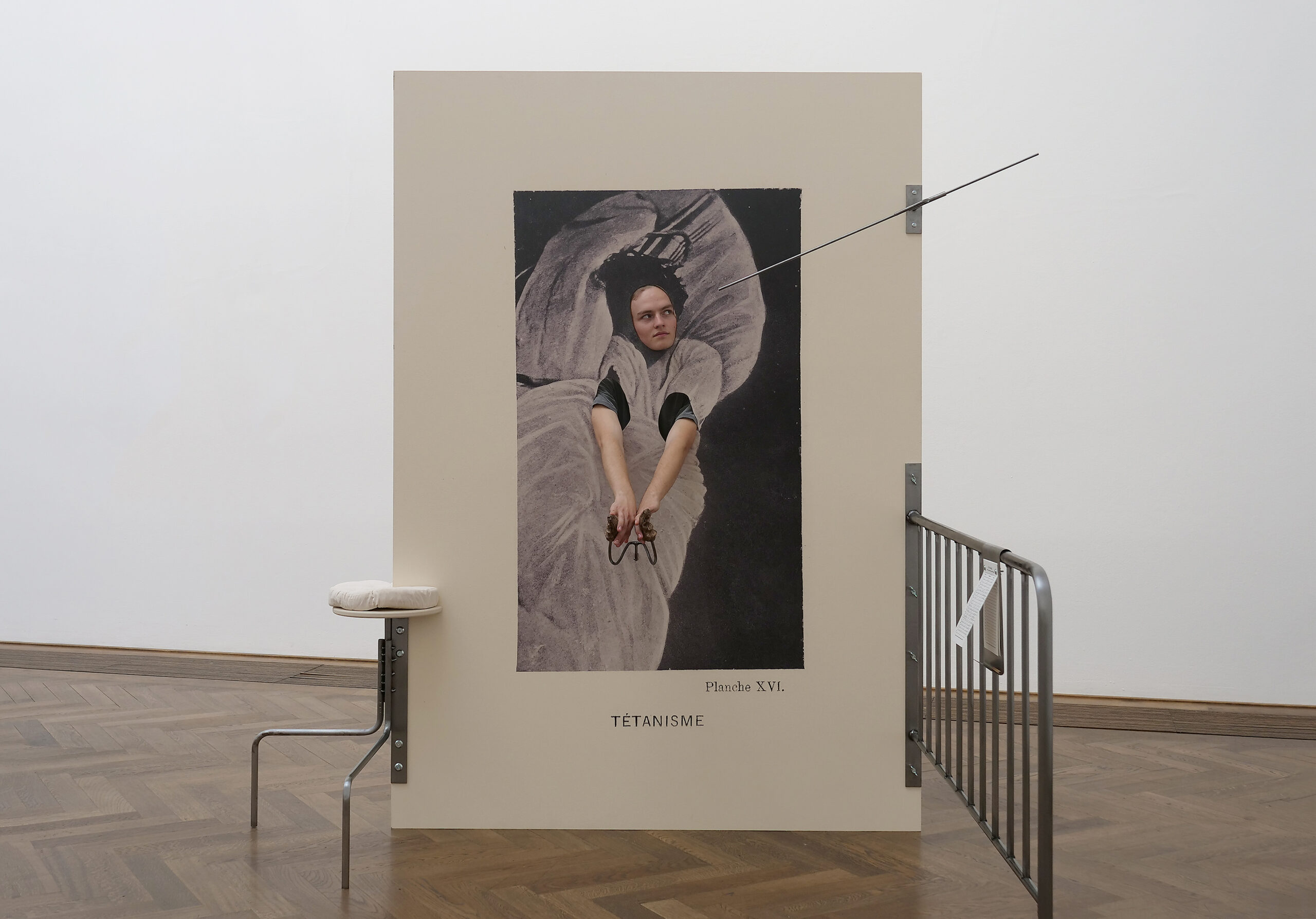 Sofía Durrieu’s practice inhabits the interface between sculpture and performance. She examines the human body and the inherent tension between body and environment. Hereby, she explores daily routines, their interruption, and the resulting changes in perception. Her practice involves classical techniques of sculpture such as metal work and casting, as well as reorganization of everyday materials, which she inscribes with perceptual systems, habits, and automatisms. She studies how identity is recognized and experienced in these systems, and how perception changes through interaction. In many of her works, she invites visitors to engage with her sculptures and thus become part of the work.

Sofía Durrieu (*1980 Buenos Aires, Argentina, lives in Basel, Switzerland and Buenos Aires, Argentina) spent her early years in France where she trained to become a ballet dancer. She studied Fine Arts at Prilidiano Pueyrredón, Philosophy at the University of Buenos Aires, and Graphic Design at the Faculty of Design of Buenos Aires. Later she became interested in ceramics, sculpture, yoga and performance. In 2018 she moved to Basel, Switzerland to join the Master in Fine Arts program at FHNW HGK Institut Kunst, directed by Chus Martínez, graduating in 2020.
Recent solo exhibitions of the artist were Magenmund at Palazzina, Basel, Amenities at Reaktor, Zurich, Control Remoto at Pasto Galería, Buenos Aires, and Puppet-me (or example of a five-legged walking stick) at Ruth Benzacar Gallery, Buenos Aires.
Her work has been included in several group exhibitions in Switzerland, France and Argentina, among them at Kunsthaus Baselland, Basel, CEAAC Strasbourg, Federico Klemm Foundation, Buenos Aires. In February 2022 her work was part of the Performance Biennial in Parque Memorial in Buenos Aires. Sofía Durrieu’s work is featured in several important private collections in the Americas. Recently she has been awarded an Atelier Mondial residency in Tokas, Tokyo, and has been awarded the Werkbeitrag Kunstkredit Basel Stadt 2021, as well as the 2022 Swiss Art Awards. Solo exhibitions at Ruth Benzacar, Buenos Aires, and at Livie will take place in Spring and Fall 2023.


For more information about Sofía Durrieu and available works, please contact us at marie@liviegallery.com.